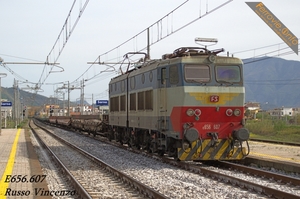 It was fortunately less severe than feared the principle of fire which last January 26 blocked the E.656.607 in the hinterland of Bologna.

The machine, after repair, has been sighted today in regular service at the head of a freight train.

We recall that the locomotive is still wearing the original gray and blue color scheme restored after having received the XMPR livery.